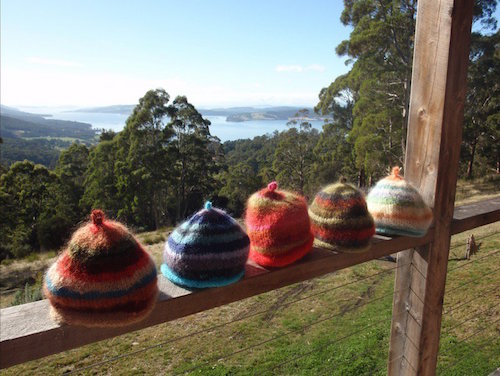 (See also “Not Lost After All”)

But Tasmania has a vibrant culture of textile art and craft.

As I started reading about the Handweavers, Spinners and Dyers Guild, I found a pattern that repeated. Tasmania’s streetscapes can be shadowy and cold with a lot of draughty-looking old buildings. But look deeper and you find that,

behind the stone walls, bright things are happening.

The Handweavers, Spinners and Dyers Guild of Tasmania, Inc, began as “The Spinners and Weavers” in 1970 when “ten ladies met in a private home to encourage one another in their infant spinning and weaving efforts” (Textile Journeys p1).

The first president, elected in 1971, was Fran Attrill. Her husband made her wheel from a plan he had drawn up himself, copying a kit from Holland. Fran began with some scrapings off the wool shed floor.

“Then I remembered an old friend who used to spin … She looked at my scruffy bit of wool and gave me handful of lovely wool to try … I went to Neale Edwards, who were skin dealers, and they found me some beautiful wool. Suddenly I could spin.” Textile Journeys, p3

Members of the HWSD Guild have developed and contributed to courses at the Hobart Tech, later the College of Advanced Education.

In 1978, tapestry designer and weaver, Nicole Johnson, founded The Secheron Textile School, which ran until 1983 at Secheron House in Battery Point.

This was established to promote textile activity as an industry, an art and a recreation. It held exhibitions, workgroups and had a permanent display of textiles.

Secheron offered space for textile craftspeople to meet. There was a weaving school which offered training in all aspects of textile manufacturing. There was a two-year certificate course, run as part of the Hobart Technical College, later incorporated into the School of Art at the University of Tasmania with weaver Peter Townley.

The Spin-Ins were begun in 1978 by life member, Barbara Fowler.

“I started spinning in the ’50s when wool prices were very low. Some of the local farmers’ wives decided ‘if we can’t eat it we must do something with it’. Barbara Fowler, Textile Journeys, p41.

At the first Spin-In in June 1979, the Oatlands spinners were prevented from attending because of snow.

It is now a three day biennial event, with participants from all over Australia and overseas.

In 2017 the Spin-In was held on 3rd and 4th March. It involved on-stage interviews, workshops, demonstrations and competitions. There was a competition for the longest two-ply thread spun out of ten grams of wool, with different categories for different spinning methods.

For the Highland Championship, competitors prepare raw wool and spin and knit a given shape.

The Handweavers Spinners and Dyers Guild of Tasmania now have around 400 members and there are groups all over the state. They are involved in exhibitions, book publishing and demonstrations. The premises at St George’s Church houses a Yarn Store.

There is a lot more going on that just spinning and weaving.

“These days I am occupied with dyeing wool with Eucalyptus cordata leaves and making all kinds of buttons to use on handspun garments” Barbara Fowler, Textile Journeys, p41

One favourite kind of event is the  “Wonderful Woolly Weekend Workshop”. The first of these was held at The Grange in Campbell Town

On Mother’s Day 2016, the Guild was invited to participate in the Cascades Female Factory Open Day, demonstrating spinning and weaving as they may have been undertaken in times gone by.

“We were also very fortunate to have the Tasmanian Weavers and Spinners Guild attend and demonstrate their equipment and skill at using it.  They were hugely popular and a real bonus to have them participate in the day.” Cascades Female Factory website.

As well as the Yarn Store, the premises at St George’s Church house a comprehensive library focussing on fibre art.

In 1999, after four years of work by many members, the Guild completed a tapestry designed by Sylvia Parr to represent the Tasmanian environment, incorporating images of Mount Wellington, a seascape and the tesselated pavement at Eaglehawk Neck. It was exhibited at the Long Gallery in Salamanca Place in the year 2000.

“As a small child I thought everyone had lovely fabrics and exotic textiles. My aunty was a designer and my grandma collected textiles from around the world … (The Guild) started a new life for me. My house filled up with wheels and looms, fleece and yarns. I am still learning new skills and meeting great people.” Sylvia Parr, Textile Journeys, p90.

In 2011 the Guild produced Textile Journeys, published in Hobart by Forty Degrees South.

In 2016, member Mary Williams created a book containing drafts of weaving patterns written down in 1787, by her husband’s great-great-great-grandfather. Mary wove samples of all of the patterns.

She kept extensive notes, and created versions that can easily be interpreted by the modern weaver. Her book, The Weaving Patterns of Edward Hussey,  brought these beautiful patterns back into our body of knowledge of the history of weaving.

The Victoria and Albert Museum were surprised to learn that linen weaving was done in Wales as early as shown in Mary’s book. Margot Wilson, Guild Secretary

Annamaria Magnus has a studio in Woodbridge with spectacular views of the D’Entrecasteaux Channel.

The Woodbridge Hill Handweaving Studio can  be visited in the mornings (not Saturday).

Thank you to these people for the images